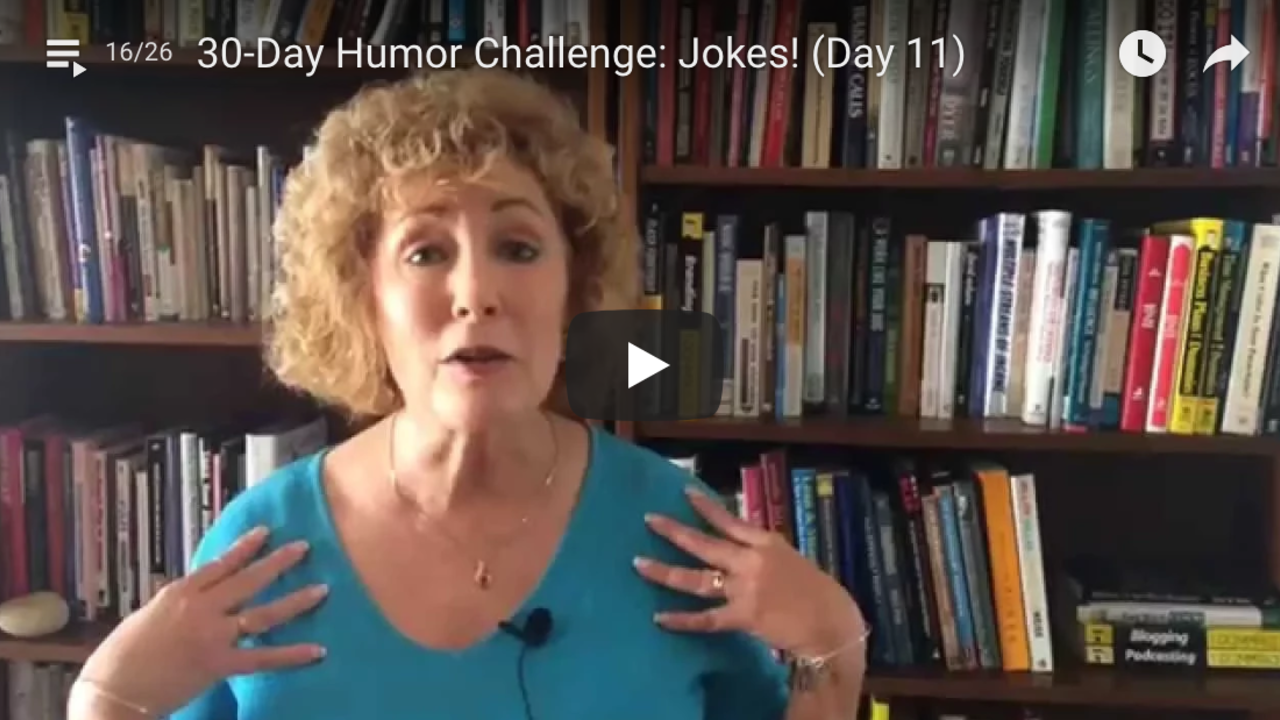 “Got any good jokes?”
“Nah, I can never remember the punch line…”

That’s how the conversation usually goes when I ask people for a joke. And when I ask for a show of hands in my audience to see who can tell a joke, only about 1 in 100 will raise their hand (while the person sitting next to them looks on thinking, “You can’t tell a joke!”).

Why is it that the majority of us believe we can’t tell a good joke? Joke telling is a skill that can be learned without a lot of blood, sweat and tears. For most of us, it’s just not that important. At least until today…

Today’s challenge: Tell a joke! If you already know a good one, then you’re way ahead. If you don’t, then here’s what you need to prepare for today’s exercise.

First, find a joke that you find funny. (Knock knock jokes, light bulb jokes, lawyer/doctor/engineer jokes, bar jokes—the list is almost endless!) There are tons of resources for jokes. You may have a joke book lying around the house (I have several I go to in a pinch but my favorite is by Garrison Keillor). There are countless joke sites on the Internet. You can ask your humor buddies. You can ask a kid

(Note: In terms of payoff (usually measured by laughter), there’s a payoff ratio that goes like this: Length-of-joke to Funniness-of-joke. In other words, the shorter the joke, the less funny it has to be for others laugh or be amused. But if people have to invest a lengthy amount of time to hear your joke and it’s not a gut-buster, you’re going to be run out of town!

Next, read or say the joke aloud at least 7 times so that you have the key points  committed to memory. Nothing spoils a joke like forgetting the punch line, or remembering half-way through that “it wasn’t about a parrot—it was about a talking horse, so let me start over…”

Then find someone to share you joke with and go for it! (And then share it again. And again.) Joke telling is a skill. The more you do it, the better you will become.

If you work in a job where the turnover is high in regards to people you see everyday, then just one joke, told well, will make you stand out! But if you see the same colleagues and customers (or students or staff or friends) day after day after day, then you might want to learn a repertoire of jokes.

Sharing a good joke with another person, whether at work or at home, can build rapport and strengthen relationships. And it communicates to others that you appreciate humor, which people see as a valuable trait.

That’s it! Congratulations for committing to another day. I hope you’ll join me tomorrow for the next humor challenge. I’m Karyn Buxman reminding you to create a humor habit and reap the benefits. Humor is power!