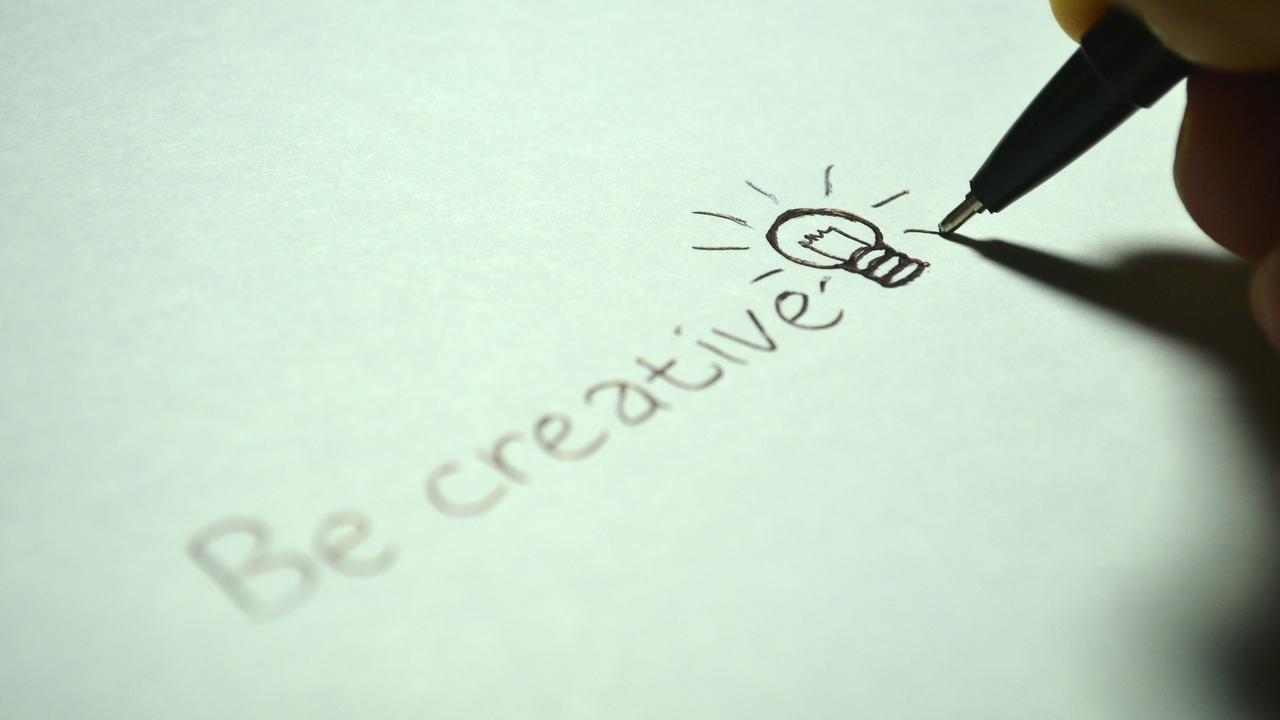 “I’m brain dead,” my pal, Sheila, moaned over her coffee at our break. “I wouldn’t recognize a fresh idea if it jumped in my face and wiggled. I’m just not creative. Am I too left-brained? Where do you get all your ideas?”

What is creativity? Like humor, it’s a mindset, a process, a way of looking at things. Researchers once believed that creativity was found primarily in the right hemisphere of the brain; they believed “right-brained” people were more creative. Now researchers speculate that creativity involves both hemispheres, that it’s a combination of both analytic and intuitive thought.

Are you a creative person? Why is it that as children we’re able to tap into our natural creative abilities only to be stymied later as adults? Perhaps it’s because we’re taught early on to be logical, to look for the one right answer, and to be serious.

1) Break habits. Have you ever found yourself or your coworkers doing things only because “that’s the way it’s always been done”? We perform many of our daily tasks without even thinking about them. While this can be helpful at times, it can also be a means of blocking creative thought. Break your routines. Roger von Oech, expert on creative thinking, terms this giving yourself “a whack on the side of the head.” Try sleeping on the opposite side of the bed. Take the scenic route home. Try a new seating arrangement at the dinner table. Listen to a style of music that’s not familiar to you (Country? Opera? Rap?).  Eat dessert first.  These simple jolts in your routine can lead you to new ideas.

2) Ask why. Children are naturally curious. Anyone who has even been around toddlers knows their list of “whys” goes on and on. “Why do dogs bark?”  “Why is the sky blue?”  “Why do I have freckles?” To answer any question only leads to another question. Yet adults are quick to respond with the right answer.  Period. End of discussion. Try being open minded. Instead of assuming the right or most logical answer, ask why. See what new thoughts this provokes.

3) Look for unlikely connections. It’s customary for us to think in terms of logical connections. But to break out of this line of reasoning, think of “what if.” What if men could become pregnant? What if clothing was edible? What if cars could be fueled with food? Items that we take for granted were once someone else’s “what if”: What if stairs could move (escalators); what if you could combine phones with copy machines (faxes); what if you could cook food without heat (microwaves). One beer company aired a tremendously successful ad campaign by combining unlikely objects and events, such as sumo wrestling with high diving or cows on surfboards. Ridiculous? Exactly! And these commercials made their product memorable to their viewers.

4) Take risks. Many folks are afraid of coming up with creative or unusual ideas because they don’t want to look foolish. Others have been rewarded for years for coming up with the “right answer” and fear coming up with the “wrong answer.” Samuel Smiles once said, “He who never made a mistake never made a discovery.” Creative persons are willing to risk appearing foolish or silly. It takes a strong self-esteem to risk being different or to risk failure. Believe in yourself and be a risk taker. And reward your children or coworkers for taking a leap of faith with an imaginative idea.

5) Take time to play. Like creativity, humor is a mindset, a perspective, a way of looking at things. Children are naturally creative. One reason is that they are playful with their ideas. The Chinese philosopher Lao Tzu said, “As soon as you have made a thought, laugh at it.” Try putting your next problem-solving meeting in a JEOPARDY format. Begin a budget meeting with a joke or funny story from each participant. Hold a theme day where everyone wears a goofy hat. No one thinks twice about scheduling time for work, but many consider play frivolous. And yet, a light and playful attitude stimulates creative thought that can actually increase productivity.

I can’t think of a single occupation that couldn’t benefit from some creative thoughts and fresh ideas.  Businesses move ahead by innovation. The ability to be creative and innovative lies within you. Take that first step now and experience the benefits of humor and creativity today.