What happened to The Journal of Nursing Jocularity? 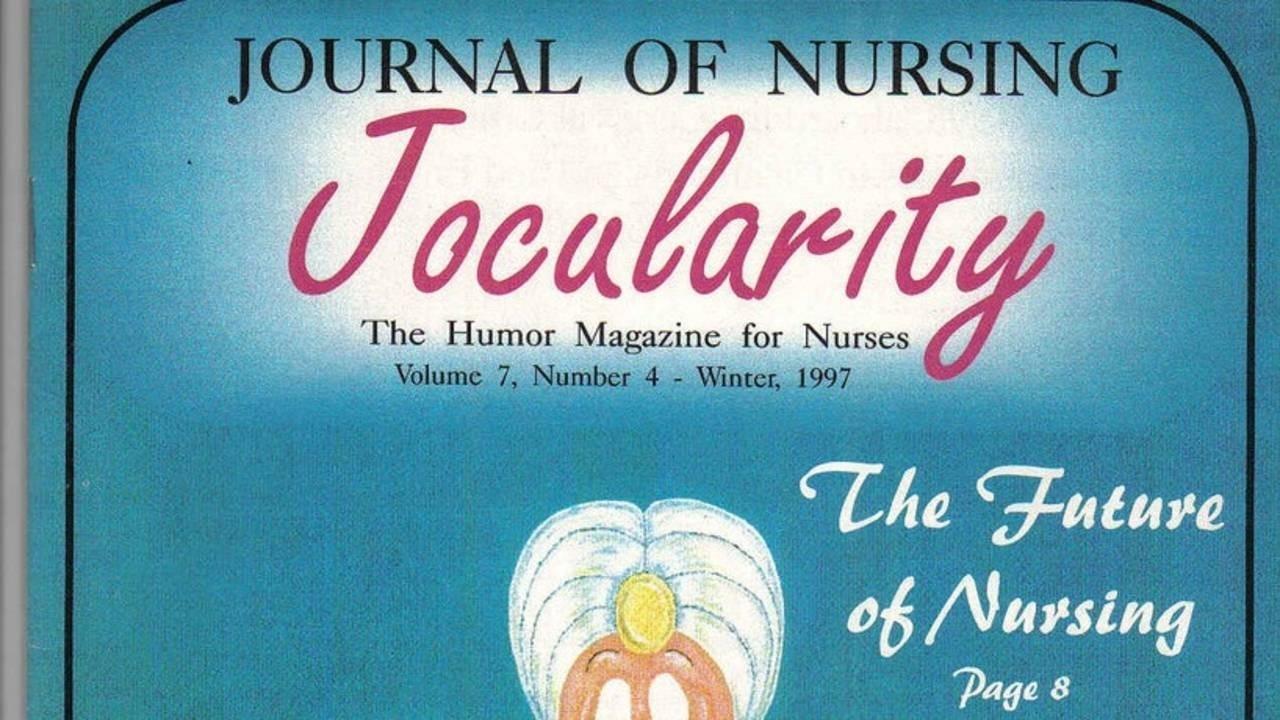 Thanks for asking. I was Vice-President of the JNJ during its eight year stint and best friends with publisher, Doug Fletcher. Doug had a great vision when he created the JNJ and left a tremendous legacy. His untimely death, and the deaths of our friends and colleagues Bob Diskin (Too Live Nurse), Georgia Moss, and Diane Rumsey, left a huge void in the world of healthcare humor. In Doug’s honor, AATH has named its Lifetime Achievement Award after Doug (see www.aath.org)

Below is an announcement I created when we ceased publication of the JNJ. Barely a day goes by that I don’t think of Doug and smile.

The Journal of Nursing Jocularity was a quarterly publication for nurses and health professionals that was written, edited, illustrated and published by nurses and health professionals. The first issue was Spring, 1991; the last issue was the Spring, 1998. Filled with satire, true stories, cartoons, and all around funny stuff related to nursing and health care – it established its place in nursing history as the only humor magazine for nurses.
With the death of Doug Fletcher, Diane Rumsey, Georgia Moss, Bob Diskin, and Debra Woodbury on May 1, 1998 the Journal of Nursing Jocularity ultimately ceased publication.
Below is the news report from the Albany Times:

Tragic Accident Results in End of an Era

A fiery head-on collision between a tractor-trailer and a sport-utility vehicle left five people dead and three injured Friday morning on Route 20.  The dead were registered nurses scheduled to perform in a comedy show Friday night at the Theater Barn in New Lebanon. The show — “Who’s Got the Keys?” — was supposed to run three nights. A representative of the theater said Friday afternoon that the show had been canceled.All the victims, three women and two men, were in a 1994 Ford Explorer. One woman was thrown from the vehicle onto the road. The others remained in the Explorer, which caught fire after the tractor-trailer rolled over it, police said. A third car, a 1987 Chevrolet sedan, also was involved in the 10:24 a.m. accident.  The Explorer was registered to one of the victims, a Columbia County resident. The others were from Florida, Michigan, Pennsylvania and Arizona, State Police Capt. John Byrne said.The names of the dead were being withheld pending notification of their families, Byrne said. They were pronounced dead at the scene by Columbia County Coroner Angelo Nero.State Police Sgt. G.E. McGreevy said the Explorer pulled out of Jefferson Hill Road onto Route 20 and into the path of an eastbound tractor-trailer laden with about 1,300 used tires. The vehicles collided head-on.  The crash also involved a third vehicle that was heading west on Route 20 toward Nassau, which police surmise might have collided with the tractor-trailer before it rammed into the Explorer.  The condition of the wreckage and the death toll made it difficult for State Police to immediately determine the accident’s cause, Byrne said.

Three people were pulled alive from the crash scene and taken to Albany Medical Center Hospital, one of them by helicopter. The accident closed Route 20, a two- to four-lane road that twists through Rensselaer County en route to Massachusetts.

Truck driver Byron Chacon, 30, of West Haven, Conn., is in fair condition, authorities said. He underwent surgery for injuries to his right arm and suffered multiple abrasions, according to hospital officials.  His co-worker, Jose Ardon, 38, also of West Haven, was in fair condition with a head injury, facial cuts and burns to his hands, officials said. He was taken to the hospital by helicopter.  Donna Brightman, 36, 921 Saratoga Ave., Ballston Spa, the driver of the third vehicle, was released from the hospital after being treated for a head cut and a knee injury.

Police said the tractor-trailer began its trip from the West Haven offices of Inter-East Tires, which collects used tires and brings them back to Connecticut. The truck had made several stops in Albany and Troy, and was en route to Pittsfield when the accident occurred. “I feel terrible,” said Inter-East Vice President Steve Briley. “This fellow (Chacon) has been an excellent employee. We’ve never had a problem.”

Brightman’s westbound sedan, which was damaged on the driver’s side, careered off the road into the woods about 100 yards from Jefferson Hill Road. Broken glass and parts of her car were strewn along the road, uphill from the crash site.

Byrne said it was too early to determine what happened, but police have developed a working theory: that the tractor-trailer was heading down a moderately steep hill on Route 20 while the Chevrolet was headed uphill toward the village of Nassau. The Ford Explorer was on Jefferson Hill Road, which is about in the middle of the hill. Police think the blue car might have hit the tractor-trailer first, causing the truck to plow into the Explorer as it pulled out of Jefferson Hill Road heading toward Nassau.

The Ford Explorer was reduced to a twisted, blackened hunk of metal. The vehicle appeared to be squashed, as though the tractor-trailer had driven directly over it — which Byrne called “one possible scenario.”

The impact of the trailer hitting the Explorer was so great that the vehicle’s license plate was found deep in the woods. The Explorer caught fire and was fully engulfed when the members of seven volunteer fire departments arrived.

The tractor-trailer plowed over the north side guardrail on Route 20 and flipped, scattering the used tires onto the road and into the woods. The trailer stretched halfway across Route 20, blocking the road.  Two hours after the accident, fire and police were still extracting the dead from the Explorer.  “You get pretty messed up when you see people burning and can’t do anything about it,” said Tsatsawassa Fire Chief Jay Kreutziger, who arrived at the scene moments after the crash and saw the Explorer engulfed in flames.

Kreutziger said a nearby resident, who was unidentified and could not be found, hurried to the road with a fire extinguisher in an unsuccessful effort to douse the flames.  Both truckers were able to get out of the vehicle on their own despite the fact that the truck’s cab was upside-down.  Traffic was diverted to side roads off Route 20, which remained closed as of 11 p.m. Friday but was expected to reopen by midnight.

At a news conference Friday night at Troop G headquarters in Loudonville, Byrne said he confirmed that several of the victims were nurses who were supposed to perform the night of the accident in a production called “Who’s Got the Keys?”  The show was part of a Nurses Week celebration, following a demonstration at the state Capitol by a grass-roots nurses organization called the Florence Project that publicizes problems related to health care.

Bright yellow fliers advertising the show were strewn about the accident scene at the intersection of Jefferson Hill Road and Route 20.  The fliers described “Who’s Got the Keys?” as a musical comedy put on by a cast of 20 singing and dancing health care professionals. The show was to be about an exhausted nurse who “discovers the real meaning of being a nurse” by battling an evil, four-headed HMO monster with help from a wacky cast of characters.

Katherine Smeland Pebler, the New York state coordinator of the Florence Project, said the five nurses who died in Friday’s accident had just rehearsed “Who’s Got the Keys?” at the Theater Barn and were heading to Albany to attend the rally at the Capitol steps.  A nurse who had been at the rehearsal but declined to join the group heading to the rally and instead went home to her 4-year-old son assisted the police in identifying the victims, Smeland Pebler said.

“Our profession has experienced a great loss,” said Smeland Pebler, reached by phone at her home Friday night. ”The fact that these RNs, who have been working so hard on this play to bring to light the demise of health care in our nation, died, is tragic. Further, it disturbs us with the Florence Project that they were on their way to our rally.” Oster contributed to this report.